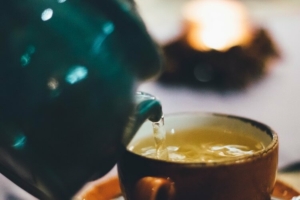 “No way,” was my initial reaction when my dermatologist first recommended oral Finasteride for my rapidly receding hairline.  My mind was made up, and I was absolutely not taking prescription medication for my hair loss.  I was too afraid of the potential side effects I’d heard about.  Bald certainly was better than impotent, although neither seemed like a great option. True, the number of men who experience sexual dysfunction from Finasteride is minuscule.  With my luck, though, I would be one of the three men out of a million affected.

So, I started checking out natural DHT blockers.  Natural is a better way to go, right?  Here’s what I discovered.  Yes, some natural DHT blockers are showing promise and are worth a test drive.  Are they strong enough to stop your hair loss and regrow your hair?  After many nights of research and weighing the pros and cons, I ended up going the prescription route after all. That doesn’t mean that you won’t come to a different conclusion.   Here’s a guide to help you decide whether natural DHT blockers are the right choice for you.

Is there a difference between how natural supplements and prescription DHT blockers work?  Yes and no.  Functionally, both natural and prescription DHT blockers do the same thing.  They prevent testosterone from converting into Dihydrotestosterone (DHT) that attacks and shrinks your hair follicles.  When your hair follicles are miniaturized, it’s difficult for healthy new hair to grow, and existing hair falls out.  So functionally, both natural and prescription blockers do the same thing.  The main difference is the way they block the DHT and their strength.

What Enzymes are Being Inhibited?

One milligram per day of Finasteride selectively inhibits the Type 2 isoenzyme that converts testosterone to DHT.  Half a milligram of Dutasteride inhibits both Type 1 and Type 2.  Yes, Dutasteride is considered a stronger medication because it’s a broader spectrum drug.  How do natural remedies compare?  The jury is out.  Not enough research has been conducted to fully understand which enzymes natural DHT blockers inhibit or the amount needed to do the job.  That said, let’s discuss what we do know.

Even though more research is needed, preliminary studies indicate that certain supplements show the potential to stop hair loss and promote new growth. Here are some to watch:

According to a study conducted on 76 men with androgenetic alopecia (male pattern baldness), pumpkin seed oil increased participants’ mean hair count by 40 percent compared to 10 percent of men who used the placebo.  Most participants did not experience any adverse effects from the pumpkin seed oil. (01)  Before you rush out and buy pumpkin seed oil, consider this.  The study was the first of its kind and the sample size was small.  The study also did not determine how pumpkin seed oil works.  Neither DHT nor prostate-specific antigen (PSA) levels were tracked.

Rosemary oil was put to the test in 2015 during a small research study of 50 men.  When compared to two percent Minoxidil, rosemary oil had a surprising result.  It was found to be equally as effective. (02)  Here’s the catch, though.  Five percent Minoxidil is stronger than two percent and more effective. (03)  Is there a dosage of rosemary oil strong enough to regrow your hair?  The jury is out.  More research is needed.

Saw Palmetto is a palm-like tree with berries.  Extracts are known to have medicinal purposes, and there’s evidence that saw palmetto stimulates hair growth.  Thirty-eight percent of men in one research study saw increased growth after using saw palmetto every day for two years.  Sounds promising, right?  It is.  That’s why we added saw palmetto to our supplements, shampoo, and conditioner.

While saw palmetto is a good complementary treatment to prescription hair loss medications, we don’t recommend it as a stand-alone treatment for androgenetic alopecia.  In the same study, more men who used Finasteride experienced hair growth than men who used saw palmentto.  The study also indicated Finasteride was more effective for men with more advanced hair loss. (04)

Green tea contains a plant compound called epigallocatechin gallate (EGCG) that is believed to act as a DHT blocker and prevent hair loss due to male and female pattern baldness.  A study on mice indicated that 33 percent of the mice who drank extracted polyphenol from dehydrated green tea had significant hair growth compared to mice who drank plain water. (05)  Another study conducted in vivo and in vitro on humans substantiated the findings. (06)  Before you stock up, though, keep in mind that further research is needed.  We still don’t know exactly how much green tea is required to stimulate growth in humans or how green tea compares to other hair loss medications.

Sure, you know that eating a lot of junk food, drinking too much, and smoking are bad for you.  But, did you know that certain lifestyle changes can help you fight genetics?  Here are a few:

Research has indicated that just four minutes of scalp massage that stretches your skin to open the hair follicles can increase your hair thickness. (07)  Should you run out and get a scalp massager?  Maybe.  The study is promising, but it was only conducted on nine men.  A follow-up study indicates that scalp massage is more effective for frontal, temporal, or vertex thinning than diffuse thinning. (08)  More research is still needed.

Contrary to popular belief, exercise won’t make your hair fall out.  Although not proven, it may help promote hair growth and health by improving blood flow to your scalp.

Certain foods aren’t likely to make your hair fall out, but nutrient deficiencies are another story.  Vitamin D and iron are the most common deficiencies that contribute to hair loss.  The good news is that the deficiencies are usually temporary.  Once supplements are taken, hair loss will be reversed.  Foods can help make your hair look thicker, healthier, and shinier.  If you’re concerned about hair loss, ensure you’re eating plenty of protein.  Protein is the primary building block contained in keratin that makes up your hair.

Little research has been conducted on the association between sleep and male and female pattern baldness.  One study did find that men with androgenetic alopecia tend to have more sleep disturbances than men who were not experiencing hair loss. (09)  Neither cause nor effect were established.  One explanation could be stress.  Chronic stress can push your hair into a resting phase and cause hair loss.  The solution?  A good eight hours of uninterrupted sleep.

Is There A Downside to Experimenting With Natural DHT Blockers?

If you’ve seen a Hamilton-Norwood scale, you know that male and female pattern hair loss progresses over time.  Early on, the hair follicles are still open, even though they may be starting to shrink.  It’s easier to regrow hair while those follicles are still viable.  If you use a natural DHT blocker that isn’t strong enough as a stand-alone treatment, the follicles could completely close, and you may lose the opportunity to maximize growth.

What if you Need Something Stronger?

It’s understandable if you want to go the natural route to block DHT.  If going au natural isn’t right for you, though, there are options that will help you avoid the undesirable side effects that you may have heard about.  Topical treatments exist to treat male and female pattern baldness and have been proven to be as effective as oral pills. (10)  They avoid side effects because they are not metabolized systemically.  Here are the top contenders:

Another benefit of topicals is the ability to combine multiple treatments into one formula to give the highest opportunity for regrowth.  Minoxidil is often combined with DHT blockers to enlarge the hair follicles while preventing hormones that attack the hair follicles from converting.

Want to try prescription topical medication?  Topicals can complement natural DHT blockers or work on their own.  New customers can get 50 percent off of their first order.  Visit us and learn how to get started.

50% OFF with FREE SHIPPING
Use Code 'GOHAIR'